Porting games to new consoles, or PC, is nothing new in the gaming industry. Yet there are certain instances of early ports from old PC games, with one of the earliest examples being Drakkhen, a PC game created in 1989, and ported to the Super Nintendo in 1991.

Players control 4 different characters with the classic point n’ click style with rpg elements with 3D landscapes, and 2D interiors. With random encounters, and few buildings to explore inside, players will be exploring a simplified world, that mainly seems them just going from point A, to point B with their quest.

The difference between the drakkhen PC and SNES versions, it seems the developers upgraded the game with better graphics, music, and seems leveling up is automatic for the SNES version.

The best thing from Drakkhen is enemy types, most RPG’s have the typical bats, snakes, skeletons, but Drakkhen is too creative for that nonsense. Players can end up fighting giant demon dog heads, weird humanoid polygon monsters, and even just blobs of water. At night, the stars can start moving during a random encounter, and the constellations will form and attack. One of the biggest reasons to keep playing the game is to see what new enemies await you in the next area.

All of the functions were balanced from the game-play, but would have been great to have, is that players do not need to control each character for combat. Players can select what each character does during a fight in a command screen, but they cannot control any of the characters.

It is no surprise many things haven’t aged well, game-play can be excused, but one thing that I do not understand is how items are. The average monster gives you a few hundred jade, and just for a random item (potion, weapon) it could take a few thousand just to purchase one, making sense for later on in the game, but an annoyance at the start if you want potions.

One problem I had was going to a certain castle, and the game would just freeze, nothing should be causing it, and I don’t know if it’s the same for the other ports, it is something that should be known in case you choose to play the SNES version.

The PC version of Drakkhen has graphics that you would expect from early DOS games, a bit bland in large environments, but some good detail when it comes to characters and important areas.

For the SNES version, although the large landscapes of the open world still seem basic, the major aesthetic of the game has been graphically enhanced. Having better color schemes, and details compared to the original.

The PC version of Drakkhen has little music, and sound effects compared to the SNES version. This version has calm music playing while out exploring the fields, and slightly ominous music when entering dungeons, They did a great job adding pleasant music to the port.

Overall, Drakkhen is an aged Western RPG that can find love for people who enjoy old games. Although you can purchase the PC version of Drakkhen on Steam, and Gog, the SNES version could be considered the better version for people who care about better graphics, and music. If you do not care about those things, then getting the original version with classic early PC game styles, I could recommend if you are a hardcore fan of the genre. 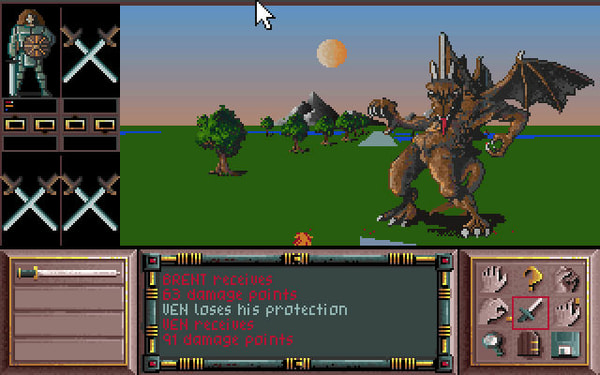